Fruits of Their Labor:  Featured on Package Design Magazine 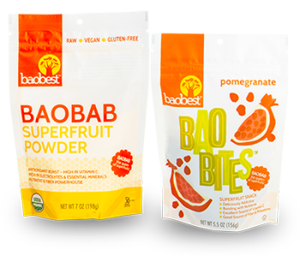 When reviewing the performance and packaging for its Baobest BaoBites and Baobab Superfruit powder, Baobab Foods wanted to increase the appeal of both products to different target consumers in boutique brand’s fan base.

“We had done a design a couple of years ago, just to have up online as we were developing plans for Baobab, but nothing too elaborate,” says Stephan Broburg, general manager of Baobab Foods. “When we looked at it a year-and-a-half ago, now that we had the BaoBites and superfruit snacks, we wanted to redevelop it into something that would go with the Baobab powder.”

Baobab Foods called on Centric Brand Anthropology to help it find visual brand identities that both target markets would crave.

“They are known for doing a lot of consumer research and their approach deals with a lot of cultural anthropologists, so it’s not just relying on surveys; they are in people’s houses seeing how they live and how they use consumer products,” Broburg says. “They do a lot of research so they were able to help us figure out the target audience.”

-See the full article at: http://www.packagedesignmag.com/content/fruits-of-their-labor

Snacks That Give Back- Oxygen Magazine