Is Africa’s Ancient Baobab Tree Growing the Next Superfood? 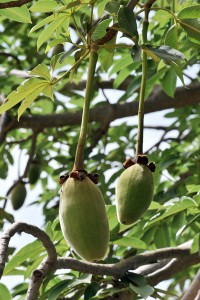 Driving out of Dakar into the fine sandy dust of the Senegal countryside, people become scarce along the dirt tracks. All I see for miles are a few scattered thatch-covered homes, some patches of greens growing beside them, and lots of scrubby grass. Then, the landscape feels other-worldly as the trees become more dense. These are not your every day-looking neighborhood oaks, but rather, enormous, magical beings that appear to have been there since the beginning of time. They are baobab trees.